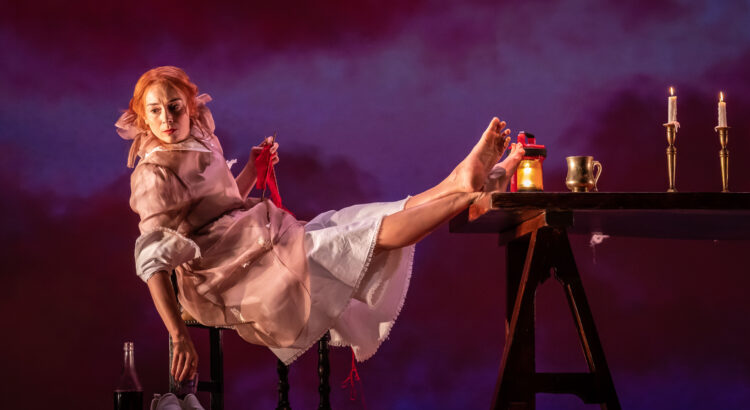 The Aldeburgh Festival got underway on Friday 3 June at Snape Maltings Concert Hall with the premiere of Tom Coult and Alice Birch’s opera ‘Violet’.

The apocalyptic tale documented the gradual disintegration of human life as a town and its inhabitants slowly come to realise how time is gradually, hour by hour, day by day, slipping away from them.

Cohesive costume and set design by Cecile Tremolieres and Rosie Elnile gave the drama an Elizabethan feel with judicious use of trestle tables, ruffs, and tankards.

It was a compelling watch in part down to the manually updated display board documenting the days completed and hours lost, building tension and driving towards the world’s inevitable end. Composer Tom Coult’s characteristically inventive and descriptive score, played by the London Sinfonietta and conducted by Andrew Gourlay, sustained a sinister air throughout the 90-minute production.

In particular, the extensive use of pizzicato bass and low bass clarinet by Coult was a pleasing addition to an already rich and inventive score, reminiscent of Dudley Simpson’s resourceful use of chamber ensemble in his Doctor Who TV music scores in the mid-70s.

I was particularly impressed with the concision in Coult’s writing. Driven partly by the libretto, itself a reflection of the story, there is an immediacy to the composer’s musical ideas that drives focus in the audience. At the same time, the music maintains originality and integrity throughout. It is a remarkable balancing act that serves the storytelling.

Its most potent storytelling twist was the outlying conceit: we know what’s going to happen at the end of the story long before most of the characters do by virtue of the display visible to all from the stage. Yet, as the realisation grows amongst the inhabitants, so the sense that this story needs to slow down because of the characters impending demise. That same sense of tension is present in Tom Coult’s music.

Violet’s depression, driven by the regularity of the clock, slowly turns to hope for the central character as time is lost and society disintegrates. The conclusion is bleak and appropriately ambiguous, though the epilogue – a concluding animated sequence depicting computer-generated characters – jarred stylistically. I need to think further on what was being said in the epilogue.

What I liked most was the work’s efficiency (driven no doubt by the relentless loss of time the inhabitants of the town are experiencing themselves). It was that efficiency that helped make the production a compelling watch.

The co-production between Britten-Pears Arts and Music Theatre Wales was originally scheduled for premiere at the 2020 Aldeburgh Festival but was postponed due to the COVID pandemic.

‘Violet’ continues at the Aldeburgh Festival on 5th June (tickets from £10). There are performances at the Sherman Theatre in Cardiff (8 June), Theatr Clwyd, Mold (19 June), Hackney Empire, London (23 June), and Buxton International Festival (18 July). It is a must-see.