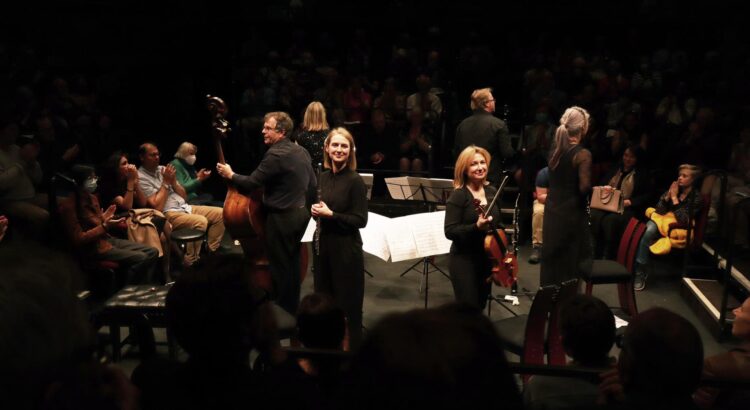 The Sheffield Chamber Music Festival got underway last weekend, opening at the city’s legendary Theatre Studio at the Crucible.

Produced by Sheffield’s Music in the Round, the 9 days of concerts curated by composer Helen Grime consist of a bold range of contemporary works paired with ever-popular core repertoire.

What was programmed in Sheffield Chamber Music Festival 2022?

In amongst the 20 date programme are visiting artists Ruby Hughes, Joseph Middleton, and guitarist Sean Shibe, the 15 remaining musical events the responsibility of a core group of players – Music in the Round’s Ensemble 360.

Such a schedule combined with a varied repertoire to prepare for – some of it familiar to each musician, the contemporary music potentially less so – seems like a big ask. That’s reflected in the care taken to protect each player’s free time in between performances by the management of the band. I get to speak to cellist Gemma for around 10 minutes before she needs to escape for her lunch in between performances of Izzy Gizmo – an endearing animated story for primary schoolers and below accompanied by live music scored for quintet and stripped back wind.

How does Sheffield Chamber Ensemble present its performances?

It’s partly perhaps the demanding schedule that drives the energy in performance. There is also a sense it’s Music in the Round and Ensemble 360’s trademark concert presentation style – live chamber music experienced by audience members sitting in a circle around the ensemble – that also ramps up the tension and delivers something either exhilarating or intensely intimate.

“We want you to feel what we’re feeling,” says Gemma when I ask her about the experience of having the audience sat so closely to and all around the players. “When you’re sitting in the round like that it’s as though the audience is with us [the players] rather than looking at us.” Sitting in the Crucible Studio Theatre with its raked seating and two tiers of additional seats above with stage lights illuminating the central performance areas, there are times when it feels to me as though we’re students observing a surgical operation.

“Not painful, I hope?” asks Gemma. “When we arrive in the studio the atmosphere is electric, and that doesn’t usually happen until you’re surrounding us in that way. The feeling we get is that the audience is surrounding us. But sat in the round, we’re all facing each other. When you’re playing in something like a string quartet that is an incredibly intimate style of music-making.”

The intimacy is appealing. Being sat directly behind Gemma during the Dvorak Piano Quartet on the first night, I felt I was in amongst the action as though I was a player myself battling my way through the wild and furious writing the composer packs into so much of the work.

So too during the Sunrise concert at Samuel Worth Chapel. Here following an uncharacteristically early start for me, I get a sense of what being a string player creating chamber music must be like. And, at 5.15am it’s the first experience of that particular day. There’s good reason why wannabee writers are encouraged to auto-write minutes after they wake up – this is when the mind is at its most undistracted. The proximity of the instrumentalists combined with my sleep-deprived but otherwise attentive brain made this a deeply moving experience.

Music in the Round’s events that the audience’s and the attention to the sensory experience that it is the audience that is the priority. That’s different from merely putting on a programme and hoping people will come along. This is about crafting an experience for the audience to immerse themselves in.

Most obviously this is in the way the audience seems to wrap around the audience, but also in the confident programming. It takes a certain kind of person to propose a crack-of-dawn concert, and a particular kind of production team and trustees to allow it to happen.

That the Sunrise concert was sold out was perhaps not surprising – there was only space for 65 people. But every single person had made a higher than normal commitment to be there meaning the intensity of the experience was greater. We were the hard-core. The ones who made an extra special effort to be here. This was A Proper Festival and we were Proper Festivalgoers.

Music in the Round’s distinctiveness goes beyond the immersive listening experience. It’s committed to bold programming. This isn’t an urban classical music festival catering for a specific demographic who smell of lavender talc and mouldy hymn books. Curated by composer Helen Grime, this year’s Festival combines familiar works with challenging new music. The energy it exudes is exciting.

On the first night a highly inventive and cohesive work from Anna Meredith – Tripotage – creates evocative vignettes with unconventional instrumental combinations. piccolo and double Bass creates an eerie Far East feel. ‘Buzzard’ played by viola and violin is especially compelling with a short motive ‘squawked’ on the viola at ever increasing intervals.

Music by Helen Grime features in the second night concert, alongside Cage, and Huw Watkins. The new and unfamiliar works (in this programme the Cage appears almost mainstream in the way it unexpectedly establishes a tranquil state) challenge and stretch. By the time we arrive at the Dvorak in the second half, I hear the familiar romantic language in the Piano Quartet with new ears. In this space the experience is not unlike doing an intense gym workout followed by some time in a steam room.

This approach isn’t new nor confined to Sheffield. But there is a sense the audience is more than just tolerating the unfamiliar as some kind of purgatory before the work they really came for. Nearly all of the seats are occupied and the applause is hearty after each work. Perhaps the audience comes to Music in the Round events not only expecting to be challenged but wanting to be with a range of thought-provoking works.

“It’s got Helens very definite fingerprints, her enthusiasms, her relationships all over it,” says Edward Mackay, Music in the Round’s Programme Manager. “That’s what’s exciting about working with her. It feels like it’s an evolution of what we do. We’ve always been champions of new music. I think the balance is different this year, and there is more of it than they would otherwise be.”

Who are the curators for future Sheffield Chamber Music Festivals?

In the years to come Kathryn Stott and Steven Isserlis are scheduled to curate, bringing their own distinctive choices to each successive festival and a marketing challenge to the small nimble team. How does Music in the Round ensure that distinctive edge and ensure audience appetite.

“That intimacy and familiarity brings about a family feeling,” says Edward. “That means we get very honest and very direct feedback from our audience, if they don’t like something we’re doing, they tell us if they do like it.”