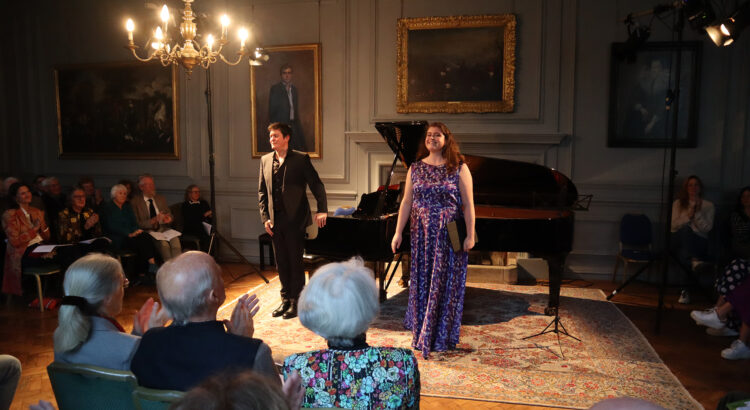 The key components of a good classical music festival are (for me at least) a solid theme, engaging performers, and carefully put-together concert programmes. Combine all of that in stunning surroundings and you’ve got yourself a hit. The Two Moors Festival is currently underway spanning two National Parks in Devon and comprising a mix of concerts and talks all based around the theme of friendship. It easily meets requirements. It’s easily a hit.

The universality of Two Moors theme his year – in this case friendship – has for the curiously minded at least a dual function.

First, it bestows credibility on a collection of events. Two Moors concerts aren’t strung together solely to give a vaguely defined rural audience demographic an evening out. The use of a theme helps communicate indirectly to the ticket-holder that care has been taken in the programming. Care demands knowledge. Knowledge means depth.

This commitment is reflected in some subtle improvements to the Two Moors programme this year. The talks on the Dartmoor weekend both explored the friendships of composers. Talks were scheduled before concerts or, as in the case of the ‘At the Schumanns’ Binge-Fest incorporated as part of the event itself. Both were given by Professor of Music at Oxford University Laura Tunbridge. The subtle difference in billing of the talks (incorporating them as part of the concert rather than separate) avoided the studious terminology of ‘pre-concert talk’ elevating the concert experience itself by focussing attention.

There was obvious attention to detail in booking Laura Tunbridge, someone who could write engaging copy and voice it successfully without putting us all to sleep (Katie Hamilton takes up the mantel for the second Exmoor weekend). The half-hour introductory talk ahead of the Jess Dandy recital of music by Brahms, and Clara and Robert Schumann also had an unexpected effect of building anticipation for the performance. That made the 30-minute talk not just a good idea but well-executed.

The ‘At the Schumanns’ concerts were similarly well sited at Great Fulford on Dartmoor a historic house set in breath-taking countryside – the three recitals attended by 100 audience members sat in an intimate wood-panelled room cocooned in the would-be salon listening to music possibly intended for a similar space. This wasn’t authentic performance, but rather a simple way to create a sense of occasion, connecting audience and performer in a way that focussed attention on the chamber music performed.

During a necessary break in proceedings that provided James Baillieu with much-needed rest from his heavy but well-executed schedule, the audience was treated in between the evening concerts to supper in the Great Hall.

Here, strangers mingled as they reached for wine and bowl food, commenting on the interior, the distances they’d travelled and the pleasing unusualness of the experience. Outside in the dwindling light an opportunity to take in the beautiful surroundings. Conversations started between strangers, long lost friends and acquaintances briefly reunited.

Later, a complete performance of Schubert’s Winterreise from Benjamin Appl. Not having seen it performed in its entirety live before, the chance to experience a different take on this much-loved work was tantalising. In the intimate space, Appl’s piercing blue eyes were at moments terrifying to look at. As a result I found myself having to look at the floor for most of the performance. But in hearing the cycle in its entirety, all of us in this intimate space embarked upon an epic journey together. Newfound friends exploring lieder and chamber music together.

In nearby Chagford the following day (in actual fact, nothing feels nearby on Dartmoor – the roads are narrow and treacherous, and short distances seem to take forever), the Albion Quartet performed Beethoven String Quintet No. 15 and with Hannah Roberts Schubert’s String Quintet in C major. Another capacity audience, enthusiastically responding to impassioned music-making. Once again, an audience creating not only an intense listening experience but lasting memories.

What Two Moors has in spades is friendliness. Its staff, led by the well-connected and warm artistic director Tamsin Waley-Cohen, make people feel welcome. And it’s an authentic welcome too. This puts the audience at ease and in turn, helps trigger conversations between strangers. This makes the concert-going experience something communal meaning that when it’s time to leave you end up leaving a little bit of yourself there. Maybe that’s the trick. Leave somewhere wanting to go back and you’ll always return.