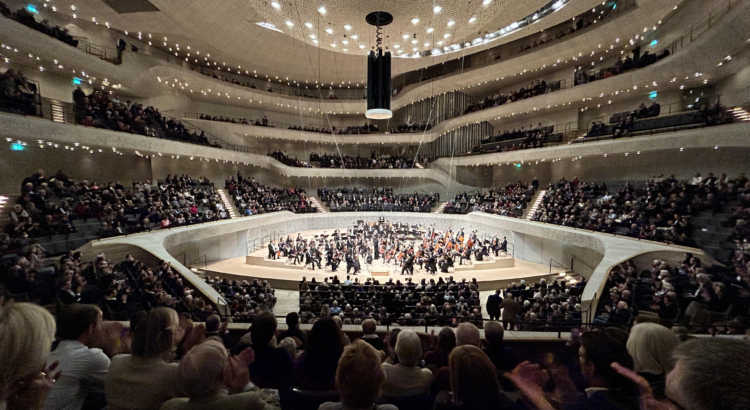 A lightning visit to Hamburg with one overriding goal: experience the Elb Philharmonie.

I’d been looking forward to this trip from when the idea came to mind on the 75 bus back from Vicky Haircuts a month or so ago. Heading to Hamburg to experience the city’s splendid Elb Philharmonie for the first time seemed the obvious choice. The 870 million Euro concert hall started in 2007 and completed (late) in 2017 is one of many destinations that appear on the Extra Special List I’ve drawn up for this year. There aren’t many on the list.

I wasn’t disappointed. This wasn’t just confirmation bias at work either. Elb Philharmonie didn’t disappoint. Hamburg’s concert hall is sited in a stunning location, perched on the edge of the River Elb, overlooking the port. The same industrious port that Hamburg resident and bicycle early-adopter Gustav Mahler reportedly found inspiration for the opening bars of his sixth symphony.

Elb Philharmonie is more than a concert. It’s an experience. One that starts on the pavement outside, with automated ticket barriers at the base of the 26-storey building establishing a public transport come Festival vibe as you gain entry to the big box on the side of the river. (Tickets are required to gain access to the building whether you’re attending a concert or not, although free day tickets to access the first-floor public space must be booked in advance.

The curved escalator spanning the first nine floors of the hotel residing at the base of the building has a Disney feel as though we’re stepping into Epcot. Our destination is a vast white cave with stairs leading off in all manner of directions. It is a world to explore slowly and with heels that click on the solid wooden floor beneath. Everything feels solid, permanent and with the addition of wood trims for leaning against, sitting on it resting your 7 Euro glass of House Red on, a reassuring sense of solidity about the place.

I steadfastly refused to take the lift and clambered the many flights of stairs in pursuit of the top-floor view. Once there, breathless, I discovered one of the playful quirks of the building: the view inside is far more captivating (and illuminated) than the one outside looking over Hamburg on an icy January night.

Doors to the auditorium remain shut until fifteen minutes before the performance – a useful way of delaying ultimate gratification and giving me a chance to observe the clientele.

Whilst there’s a range of ages and attire, the overwhelming vibe is one of a stylish night out of on the town. Lots of cashmere, expensive cotton shirts open at the collar, well-chosen colours that highlight a preponderance of salt and pepper hair. Glasses are held by the stem, not the rim. Everybody looks gorgeous and monied. I feel raggedy and British. I see absolutely no people of colour.

When the auditorium doors gracefully swing open patrons step forward in a measured way. No one seems to be in a hurry except for me. I have to take a deep breath.

Inside the scene is a sci-fi TV set come luxury cruise liner. I forgot I’d thrown caution to the wind and bought the most expensive ticket which now that I match up the seat with the ticket in my hand I realise is directly in front of the orchestra, behind the conductor. Given that the seat labelling is a little confusing, I seek confirmation from the white-haired German lady, asking her to check I’m sat in the right seat. She looks at me bemused and says ‘Where are coming from?’ I say London. She says ‘Ah.’

Not only the interior is it an incredible sight – plush with lots of movement, but it’s a delightful acoustic too. The audience has to work hard to make an impression when conductor Jakub Hrůša strides onto the stage. When the Bamberg Symphony Orchestra plays the opening chords of Brahms 3rd Symphony my heart pounds. There’s terrific detail in each separate instrumental line. The wooden stage enriches the basses and cellos in various points in the first movement that it sounds as though the players are reaching down to the bottom of the building for each and every phrase, yanking at a big thick rope to pull up the bass line. Hearty, steady, strong. The woodwind are precise, the flutes tone warm, the contrabassoon buzzing with delight. And the ends of phrases underpinned by pizzicato basses are breathtakingly tidy. Playing all together you can still hear the individual textures of the Bamberg Symphony Orchestra, gritty sounds reminiscent of the first time I heard a recording of the London Classical Players’ Symphonie Fantastique in 1993. The playing has so much heart, energy and commitment. This is in no way being ‘phoned in’. It’s as though they’re all playing to retain their contracts. Knife edge stuff. I don’t want it to come to an end.

There are minor drawbacks to this acoustic I suspect. By optimising the experience for everybody sat in the round the orchestra (across five floors) everything is made audible. Rich, generous and supportive as that acoustic is, it’s also unforgiving, exposing not only the slightest error in ensemble on stage (there were only two I noticed), but also any persistent troublesome coughs in the seats above. Little wonder Elb Philharmonie have published specific advice. Conversely when there the silence marked in the score was matched by the audience the effect was electrifying.

The morning after, a lie-in on a very comfortable mattress watching a container ship reverse into Hamburg port is interrupted by an over-eager chambermaid. Then a protein-rich breakfast minus the carbs, followed by a scoot around the Composers Quarter where I’m mildly embarrassed to say I hadn’t realised quite how many composers were linked to Hamburg. Telemann certainly seemed to be a busy chap (I was impressed by his self-publishing strategy, exploiting new technologies and monetising his creative assets to raise awareness), hadn’t known Mahler was one of the first seen cycling in Hamburg and had forgotten that Brahms had died as late as 1897 of pancreatic cancer. Not sure I needed to see his death mask necessarily.

What really stuck in mind was a quote in the exhibition guide from music historian Johann Nikolaus Forkel writing in 1778 reflecting on the shift in thinking about music during the ‘Age of Sensibility’ when CPE Bach was at his height doing his thing at the clavichord.

“Music is a language, yes indeed, but the language of feelings, not that of concepts (-) and it is only fast beginning to express the infinite gradations of feeling at that point to which other languages can no longer attain and where they are at the end of their powers.”

Once again I’m reminded how a sense of place can drive focus, provide insights and deepen understanding. We spend so long in writing about classical music unwittingly trying to describe another language, when music is or can be seen as language in and of itself. It’s easy to forget that distinction I think, and as a result we end up using language to describe something which perhaps doesn’t need describing.

Be sure to listen to Bamberg Symphony’s 2019 release of Brahms 3 – the buzzing contrabassoon in the first movement is a joy to behold.