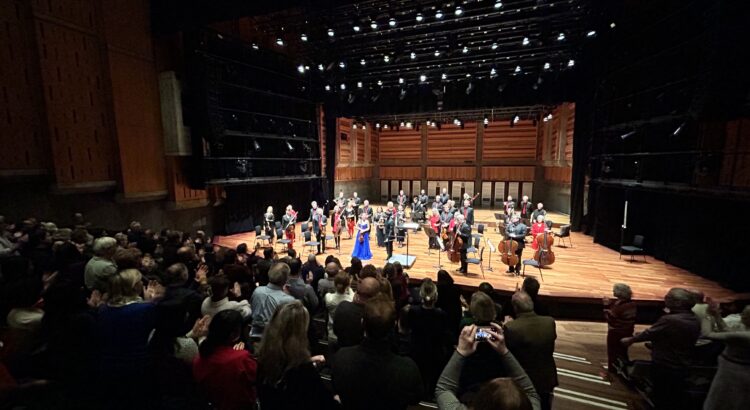 Last night’s jaunt to QEH was my first concert of 2022. Sixteen-year-old violinist Leia Zhu was very much front and centre, taking the audience’s collective breath away with a staggering performance of Beethoven’s epic Violin Concerto. The vibe was relaxed beforehand at the pre-concert foyer chinwag. Even Leia stepped up to the microphone extending warm welcomes and heartfelt thanks before her performance, the epitome of fearless youth.

The London Mozart Players conducted by the sweet, charming and dashing Leslie Suganandarajah played with a precision I’ve not heard before. Part of that might be down to the QEH acoustic, which favours a small band and an attentive audience. The detail emanating from all of the players was discernible. The ‘thumb in the air test’ comparing the distance the bow moved at the front of the violins compared to the back suggested everyone wanted or felt compelled to put the same effort in. A gratifying sight that paid dividends in an electrifying Beethoven Violin Concerto.

Vicky Haircut was my plus one for the evening and at various points in the second half was observed wiping her eyes. This brought attention to how I was feeling throughout the first and second movements – an underlying sense of tension that had crept up on me almost unawares. Across the aisle, I saw other audience members dabbing at their eyes, presumably triggered in the same way I was by Zhu’s delicacy, precision and sparkle. I was not alone, nor Vicky Haircut.

The music that resulted was something that was bold, courageous and honest. Zhu’s rendition was a slow burn. I just didn’t realise quite how tense I felt until the beginning of the stress-relieving third movement, moments before the conclusion of which my plus-one involuntarily said out loud (quietly but audibly) ‘fucking hell!’ Heads turned. A special moment. Not only had I finally appreciated this epic work but my plus-one had submitted herself to the performance – the first time she’d heard the concerto.

All this delivered by someone who only half an hour before subverted on-stage conventions and led the pre-performance chat inviting contributions from the conductor before she played the work. A sparkling evening concluded by an unequivocal standing ovation.

Make no bones about it. Zhu is a phenomenal talent. She is reassuringly self-assured. The complete package. Everything she does with or without her violin gently reminds you that there is in amongst the darkness in the world a resolute sense of hope. There aren’t many who achieve that. Even fewer have that effect in their teenage years.

If you weren’t present, haven’t experienced the Beethoven Violin Concerto, or if you were and you fancy something similarly electrifying, you might try a recording by Vilde Frang with conductor Pekka Kuusisto and the Deutsche Kammerphilharmonie Bremen released by Warner Music in 2022.

Leslie Suganandarajah conducts the Ulster Orchestra at Ulster Hall in Belfast on Thursday 19 January in a concert with horn player Ben Goldscheider.