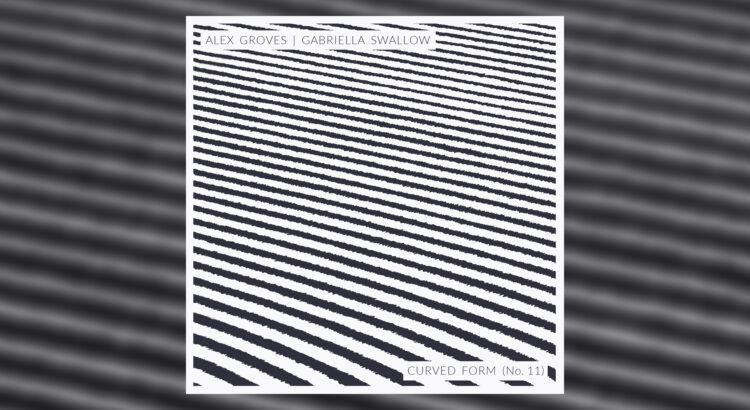 No. 11 takes on a linear path, starting with a forensic examination of textures created by cellist Gabriella Swallow (currently touring with the Jess Gillam ensemble amongst other things) before handing the baton to composers Mira Calix and Sarah Davachi to put their spin on Groves’ original vision.

Groves’s original material is hypnotic, drawing attention to minute detail in the same way the brilliant Glass/Reich homage Curved Form No. 4 did. Only here its texture – the detail that would otherwise go overlooked in the melee of cello and accompanying orchestra or piano.

In a similar way, Mira Calix’s remix seeks out that which goes overlooked, bringing to the fore false starts and everyday errors which over time become accepted and familiar. Her remix is pleasingly unsettling, where Sara Davachi uses distant harmonies to evoke gentle excitement. All three slow time and bring unexpected joy.

Concluding the EP is a track with a dreamy dance beat. Listening to it there’s a sense that what we’ve listened to is multiple producers reworking an original idea before one of them settling on the final draft. If that was the intention I like it even more.

Listen to Curved Form No. 11 and download via Bandcamp.

Composer Alex Groves is on Patreon.

Prominent exterior signage would help at Peckham’s CLF. The former cricket bat factory has such a range of office, event and creative spaces that go under the banner of the Bussey that an ill-thought out stride through the wrong entrance could result in disappointment.

After visits there to see Opera Story’s production of Dani Howard’s Robin Hood, and one or two other events I always assume the main spaces are accessed via the side entrance. But there is a door at the front – leading up two flights of stone stairs to an white washed adorned with bulky post-war speakers hinting at its industrial past. That’s the key space for me. I probably just need to make a mental note.

This detail is worth stating again (not least because my archive of blog posts is currently unavailable due to a malware attack). CLF’s interior sets the tone, long before a note has been played. And if you’ve had a fraught day full of busy-ness that tone is distinctively one of escapism. A life never lived because you never dared, now possible because it’s open, uncluttered, unfussy and welcoming.

Percussionist Joby Burgess has a similar air. Cool, passionate, proud and excited. He retains the cool-kid-who-plays-the-drums-from school vibe, at the same time as speaking with knowledge, experience and love about every composer’s work he brings to life

Composer, producer and curator Alex Groves Curved Form was scored largely for tam tams – provided a more reflective piece of storytelling. Not so much chilling as gratifyingly dark. An ambient creation that satisfied my NLP weaknesses, healing the flesh-wounds of the day that had gone before it.

Feldman’s King of Denmark – a whispered response to Stockhausen – continued the compelling listening experience but in comparative terms the material felt more a passive aggressive response to Stockhausen’s creative madness. In that way I’m not sure it worked quite so well in the running order – the other works shone brighter. Max de Wardener’s Winterreise infused exploration pushed us the edges of comfortable listening with anguished fragments of barely recognisable material and very loud drums. Some in the audience stuck their fingers in their ears.

Linda Buckley’s brilliant Discordia for sonic harp complete with rosin-coated gloves made for a mesmerising conclusion. This 2018 Barbican commission deserves more outings in evocative spaces after a recording has been released for streaming and download. An ambient-lover’s must-listen.

Alex Groves continues to show his creative and producer mettle with SOLO which combined with his gentle affability must surely project him and his work higher and higher. So too I hope for CLF Art Cafe which has over the past two years developed into a must-be-booked-at South London venue.