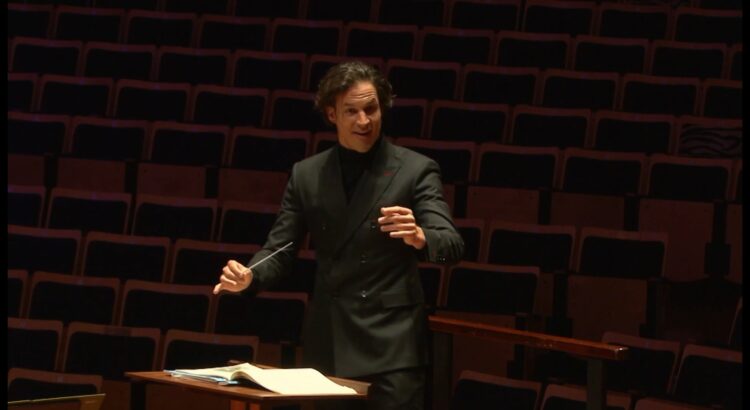 Last night Andreas Ottensamer made his UK conducting debut with the Bournemouth Symphony Orchestra in a programme of Mozart and Mendelssohn. The concert ran to just over an hour, was performed to an empty auditorium due to current COVID-restrictions, and streamed live via the BSO website.

Bournemouth Symphony Orchestra with Andreas Ottensamer is available to watch on-demand until 21 May.

Ottensamer is a youthful presence on the stage with a long frame and more than a whiff of Hector Berlioz about him. Bold gestures and long sweeping movements spanning a near 180 degrees, with a smooth and precise baton technique that caresses and cajoles, are where Ottensamer thrives.

Broadly speaking, Mendelssohn’s music – both the Hebrides and ‘Italian’ symphony felt like a better fit for him in terms of physical expression, where Ottensamer appeared more at ease with a greater range, and more flexibility in his upper body.

There were occasions during the Mozart Haffner when his communication felt a little like he was appeasing rather than directing, as though there was a need to manage the transition from player to conductor.

Similarly in the ‘Italian’ when viewers saw him readying the orchestra before embarking on the final movement. Naturally, the band needs to be ready before they can start playing music, but maybe some of the excitement about the work as a whole is the energy that is maintained throughout. In order to achieve that does the transition between third and fourth movement need to be commanded rather than guided by consensus? I’m not 100% sure. What I appreciated was how the performance made me pose the question to myself.

There were ensemble discrepancies between wind and strings, and in the strings in various places, notably in the second movement of the Haffner – a case of distancing amplifying slightly ambiguous direction. I even wondered whether the strong beats were at the eye line for the front desk but not necessarily visible by those at the back.

But one has to be mindful that these are not exactly the best conditions for a relatively inexperienced conductor. The important point here is that a musician with a considerable worldwide reputation was doing something live amid difficult circumstances.

All this said, there were some touching moments throughout, notably in the third movement minuet of the Haffner which was warm, expansive and, where called for in the score, had a gratifyingly chamber-like feel.

The sound mix from the BSO is by far the most authentic of the digital streams I’ve watched over the past few months, partly because it’s a live relay. This provides a true reflection of the some of the challenges faced by distanced playing, noticeable in ensemble between the strings and winds at the beginning of the Haffner and Mendelssohn’s Hebrides. That unintended consequence is an authentic trigger for in-person concert experiences where not every performance is perfect.

But that authenticity comes at a cost. The lack of an audience means a boomier auditorium ambience. That created moments in the Hebrides Overture (where the tempo necessarily adopted so the detail wasn’t overlooked) that felt like heavy weather (forgive the pun). In loud-tutti sections the first violins felt distant and overpowered.

When BSO began their live streams (in September of last year) they did well to establish themselves as one of only a handful of orchestras that truly performed as live. This made the visuals less of a problem for me because I was experiencing a live moment. A few months later now that other orchestras have used their ACE funding to create more polished pre-recorded ‘as live’ and patched digital concerts, so the visual discrepancies in BSO’s live relay are more evident and, in some cases, interrupt the viewing experience.

Some small adjustments only need to be made to improve the look and feel. Specifically, using hard cuts between shots rather than cross-fades (cuts reduce the pixellation caused by compression when two shots blend). This would help compensate for the challenges of distanced playing, especially in the faster seqeunces. The final movement of Mendelssohn’s ‘Italian’ would undoubtedly have benefited from fast cuts at the end of phrases in order to increase the excitement articulated in the chuntering string lines.

There are fixed shots that might benefit from being adjusting in order to improve the focal point in the image. Sometimes there were shots where the focal point was a microphone on the stage. This jarred when transitioning from the previous close-up of the principal second.

There are also moments in time when cutting back to the conductor for the upbeat (or a split second before the beginning of a new phrase) needs to be tighter so as to now crash the previous musical idea coming to an end. This would limit visual interruption.

The image contrast in the wide shots probably drives the current orange bias in the shots, hence why I wonder whether a spot of colour grading (or changing the white balance) might help create a more cinematic feel, reducing the gap between BSO’s output and say the OAE’s.

Where BSO is consistently reliable is undoubtedly in their digital user experience. Page design is uncluttered projecting a fresh unpretentious image of the band. The copy is clear, informative and useful, and bold navigation with clear white space guides the user. This establishes a perception of product reliability, and brand openness and accessibility.