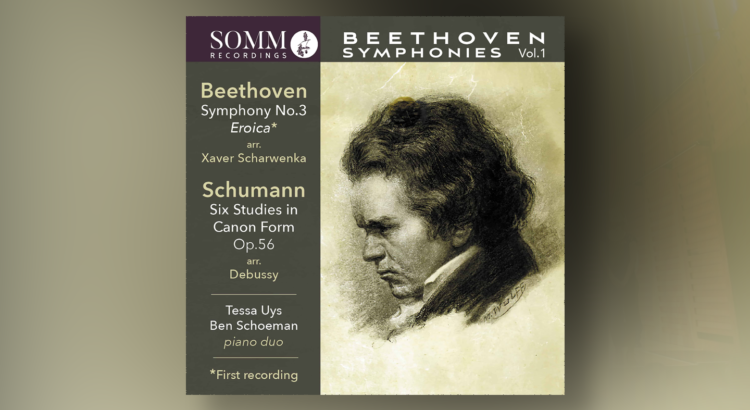 SOMM Recordings have released the first volume of Beethoven Symphonies transcribed for piano duet and they are a fascinating listen.

The thinking behind these recordings isn’t as Tessa Uys outlines in the sleeve notes to present a curiosity – why listen to a piano transcription of a symphony when you can listen to the original orchestral setting? Rather, to reflect on a period in musical performance and appreciation that will in our present-day on-demand world seem completely alien.

It took me by surprise to learn that piano transcriptions were for the majority of listeners the only way they would hear music by the likes of Beethoven, orchestral performances being a surprisingly rare experience and one which would necessarily extend to as many as they do today.

So, piano transcriptions were then ways for new works to be heard in the home in the 19th century. One assumes that the homes that saw piano duet performances of Beethoven’s epic Eroica Symphony were of considerable size and had robust instruments in them. Because heard on a piano played by four hands, Beethoven’s music sounds thick, rich, complex and hearty.

Particularly satisfying for lovers of thick scrunchy chords, are the sequence of heartstopping meaty affairs from 2’42” in the first movement. I especially like the bristling third movement scherzo made more lively in duet format over (an already invigorating) solo version I filmed for the Royal Academy of Music recently.

The Debussy arrangements of Schumann’s Bach homage written in 1840 are the perfect foil for the richness of the Beethoven. Bach’s influence over Schumann is evident, though what makes these studies compelling on a first listen is deciphering what makes it Bach and what makes its Schumann.

A couple of blissful moments worth noting. The pivot chord at 2’13” in the wistful A minor study is like a momentarily flash of sunlight through the trees. The concluding study – a B major chorale – concludes the entire album with a pleasing sense of calmness.

I warmed to the unusual sound production throughout the which gave both the Beethoven and Schumann a sense of realness as though it was recorded in a village hall at a distance. No criticism of either Siva Oke or recording engineer Paul Arden-Taylor – the production gives a sense of place that triggers the imagination. For the avoidance of doubt however, this wasn’t recorded in a village hall, but The Menuhin Hall Stoke d’Abernon.