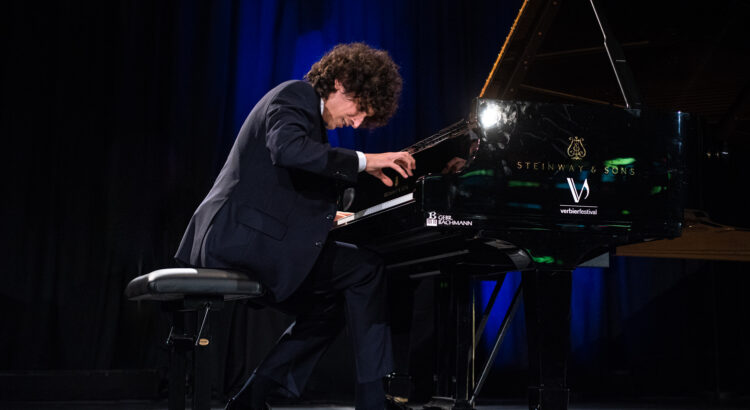 At times during this recital he demonstrated frenzied musicianship, also taking his time to hold the silence in between contrasting works. In this way he showed himself as an especially thoughtful performer bringing the audience with him on a mixed programme of Bach, Chopin, Brahms and Prokofiev.

The Bach F Major keyboard concerto first movement had a harsher fortissimo sound than I think I’d expected from Bach. Nothing but instinct to go on there in that assessment, but I wondered later in the concert whether this was a reflection of the performer getting accustomed to the setting, the piano, and the audience.

In the slower quieter second movement there were some gorgeous tender moments illustrating where Borisov felt most at ease at the beginning of the recital – quiet reflective passages. He is adept at placing pianissimo notes and chords, making the audience lean in. Come the third movement the balance between dynamics had been achieved – a calibration, if you like – that made the conclusion of the work more cohesive than the first movement. All very sprightly. Perhaps even fizzy.

The Chopin Ballade No.4 was captivating from the beginning, opening with a gentle movement that felt a little like a net curtain billowing in the breeze. Some loud sequences had a similar shrill quality to the opening of the Bach though it wasn’t quite so marked and maybe it was better suited here. Some of the epic sequences sounded a little muddy (a personal preference is always for clarity but this isn’t for everyone by any means). The epic multi-colour final minute came with clarity.

I didn’t really connect so much with the Brahms Klavierstucke so it would be disingenuous to write about it. The Prokofiev Sonata No.7 however, well that was an entirely different matter.

Here a commanding story was told from beginning to end. Percussive, dry and urgent playing in the opening of the first movement with a contrasting middle section full of different colours. Similarly comeplling was the third movement with its relentless repeating motif in the bass line. Prokofiev is where Borisov undoubtedly thrives. Some joyous fluid playing in the right hand – silky-smooth stuff. He is a master of decorative arpeggiated flourishes executed in such a way that they made me go wobbly at the knees every time I heard them. A real delight.