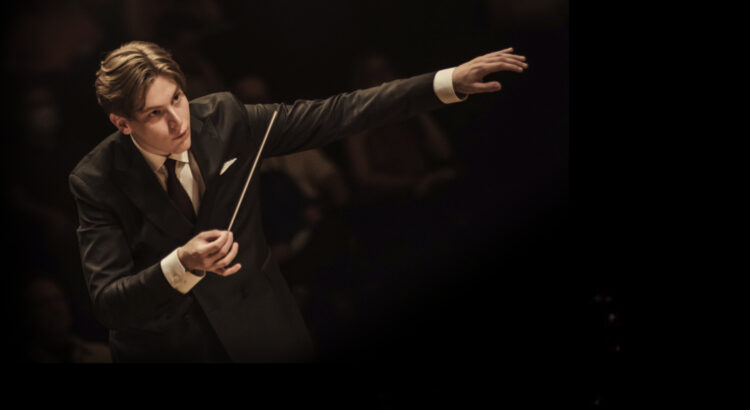 This was the first time I’d seen 25-year-old conductor Klaus Mäkelä on the podium. A remarkable presence, balletic movements, grace, elegance, and poise. If watching a conductor in action from behind can instill excitement and enthusiasm in an audience member what on earth is it like for the musicians?

There were dramatic dynamic shifts throughout this concert, but notably in the Brahms Violin Concerto with Daniel Lozakovich which combined with the rigorous attention to rubatos gave this performance space and time to explore detail without it turning into a long and drawn-out affair.

Lozakovich appeared to capitalise on the conductor’s love of extreme dynamic contrasts by making his own virtuosic moments focussed and ‘smaller’. This had the effect of drawing attention closer to the detail in the solo line – quite some achievement in the cavernous box interior of the Salles des Combins, especially when the rain started to fall on the venue’s stretched canvas roof and threatened to compete in volume with the cadenza.

I was especially impressed by Lozakovich’s maturity, his sincerity. At 20 years old I find that level of authenticity astounding and reassuring in equal measure (something for a Thoroughly Good Journal entry I suspect).

The second work in the concert – Schumann’s second symphony – saw charismatic Mäkelä in his element, directing the Verbier Festival Chamber Festival Orchestra in an electrifying performance. His trademark extreme dynamic contrasts were evident throughout, not least in the fiendishly tricky quiet opening andante that because almost imperceptibly.

The second movement scherzo was nimble with fast taut articulation in the woodwind (a terrifying part for the clarinets to have to tongue) and scurrying strings that made me think of Mendelssohn. The third movement adagio had a song-like quality delicately played with elegance and poignancy. Magical.

The concluding movement contained considerable industry but retained a sense of bounce and spirit. Splashes of colour where it was needed widened eyes and smiles.

It’s rare I get quite so excited about conductors but bearing in mind post-Brexit arrangements and the return of a more straightforward form of international travel, Klaus Mäkelä is someone I really want to see more of. A stunning communicator.

Watch conductor Klaus Makela and violinist Daniel Lozakovich in concert at the Verbier Festival 2021 via Medici.tv.