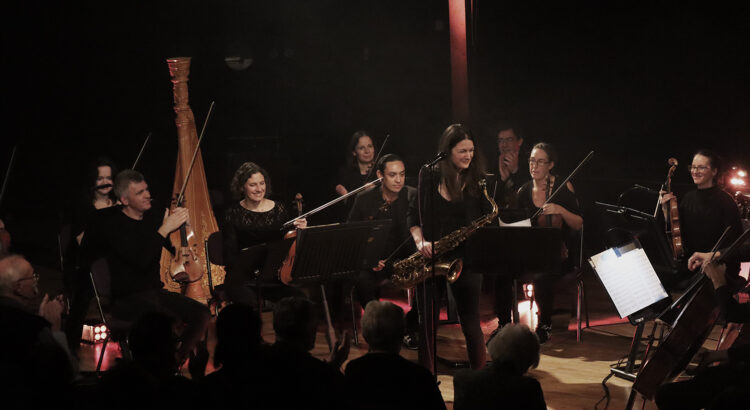 It’s around this time of year I start to ponder how to montage the past twelve months.

In years gone by that’s been a relatively straightforward process. Travel results in video clips and pictures. Cut a year-long album with a musical track and the job is done. But when a year looks visually similar to the year that went before, then the montage gets a little challenging.

Music compensates where images fall short. One album, in particular, has shaped 2021 for me. Orchestra of the Swan’s ‘Labyrinths’.

I’m a big fan of ‘Labyrinths’, shaped in part by the editorial that drives the UK’s third and largely untalked about classical music radio station Scala Radio. Its musical purpose is articulated by playlist choices that combine core classical with modern-day crossover. Juxtaposing the two works better than you might think.

Orchestra of the Swan’s mixtape albums on Signum (‘Timelapse’ and ‘Labyrinths’) epitomises that approach. Artistic Director David Le Page personifies it too. “I lasted six months in music college,” he says nonchalantly during a pre-show talk in the bands home town Stratford-upon-Avon on Tuesday this week, “everything is focussed on the score in the conservatoires.”

It’s an interesting point he highlights. Jazz and folk are a creation in the moment; classical is focussed on recreating an imagined version of the past from a document which is often seen as the extant source.

But Le Page’s mixtaping isn’t a reaction to the confines of conservatoires.

It’s a celebration. It’s a skill that underlines why music is useful. It has the power to point to the thing none of us wants to talk about because the feelings are too painful to confront.

At the same time it can heal. Combining the two is where the magic is found.

Not many people are able to achieve that, largely because they get distracted by other things.

‘Labyrinths’ represents the highly sought-after middle ground that naive marketers crave but daring classical musicians get on with and make happen.

A mix of the curious and loving homage, OOTS second mixtape celebrates resilience,  consoles loss, and promises hope with a musical selection that spans 300 years. Hear reinventions of much-heralded classics alongside popular tracks that playlist our present-day experience, with brand new music that document the period.

Opening with Richter (not something I’d actively seek out), followed by a ravishing oboe solo from Victoria Brawn (recorded at Saffron Hall in April of this year), Labyrinths tentatively starts with remembrance and kindness. The frenetic La Rotta gives permission for a maniacal dance-off for those meeting for the first time in 18 months. A cheeky contortion of Bach’s Mit Fried und Freud gives Jacques Loussier a run for his money too, lining us up nicely for the melodrama of Purcell’s Cold Genius.

Singer Jim Moray brings a modern feel to this classic – modern-day human edge to the story of King Arthur gradually returning to life from a period of stasis. It won’t be to everyone’s taste, but the combination of cut-down strings and pop-like vocals is, well, genius curation.

Piazzolla’s heartbreaking celebration of introversion is deftly realised by Sally Harrop who clearly adores the melodic line as Brawn does in the Respighi.

Britten’s Serenade with the beguiling Nicky Spence is the thing you never realised you wanted to hear next. I’d be happy for the album to end there (I’m not entirely convinced I need Farewell to Stromness) though I appreciate the parting gift in the last track.

It’s rare I wax lyrical about an entire album, but Labyrinths. That’s partly because when I saw part of it recorded at Saffron Hall it was the first live music I’d heard in months. It was also the moment when I reconnected with musicians from my past – people I’d got to know at the beginning of their careers. Labyrinths is then a musical tribute to the indomitable spirit of musicians, people whose talent I have depended on and am indebted to throughout the pandemic.