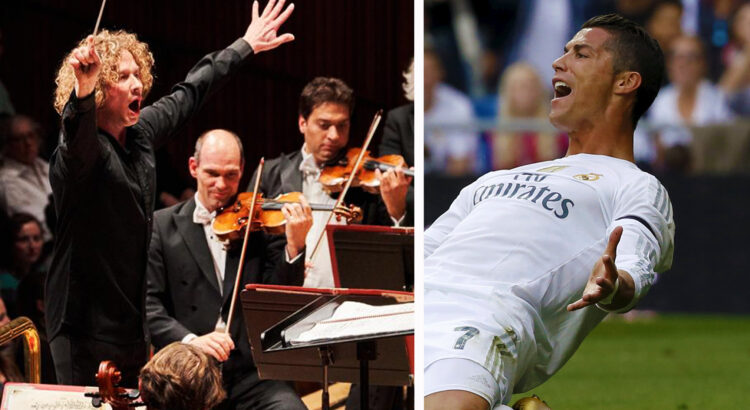 An innovative new scheme set up by one of the UK’s leading arts consultancies looks set to introduce live classical music performances to a whole new audience across the UK.

The project is the culmination of a year-long consultancy programme headed up by Thoroughly Good.

Thoroughly Good spent much of the pandemic thinking strategically about what would need to be done once COVID mitigations in concert venues and theatres were lifted.

During that time a rigorous feasibility study was embarked upon with cultural leaders who fine-tuned the radical new scheme that will build a new cultural audience for the future, bringing UK football clubs and orchestras together to share venues, budgets and audiences.

In an exciting series of collaborations to come, Pitch Invasion will introduce football fans to classical music in a series of stadium based concerts performed by a UK orchestra on special stages erected in stadium seating. Classical music fans will in return get reduced rate access to football matches as part of a season-wide subscription to their favourite orchestra’s concert programmes.

At an invitation-only event, earlier this week journalists were introduced to Pitch Invasion and the thinking behind the scheme.

“It seemed like a no-brainer to me,” explained Thoroughly Good’s Jon Jacob at the press event, “football has a massive following not just in the UK but across the world. Why isn’t classical music working more closely with football teams to raise the profile of the sometimes overlook musical genre?”

Jon continued: “People attending a match will now get more value from their ticket. They’ll come for football but they’ll get so much more – they’ll get all the ‘great’ classical music tunes before, during and after the match, played by an actual orchestra there in the stadium with the crowd.”

Pitch Invasion has seen multiple UK orchestras and football teams sign up before the scheme starts, currently scheduled for the beginning of the 2022/2023 season.

The Department for Culture, Media and Sport is said to be behind the project which will play a significant part in making up for the anticipated shortfall in Arts Council England funding brought about by the Government’s much-trumpeted ‘levelling up’ agenda.

“Many arts organisations fear a significant drop in ACE funding when money shifts to the North East,” explained Jon during the press conference, “Thoroughly Good believes that by joining orchestras and football clubs together in a sponsorship deal of this kind, a great many orchestras will be able to effectively plug the financial gap. It’s not like football clubs can’t afford it after all.”

Who’s signed up to ‘Pitch Invasion’?

The response from the UK classical scene is described as ‘really encouraging’.

Nearly all of the UK’s orchestras and ensembles have accepted the invitation, some already having signed agreements with their local clubs.

“Inevitably, the BBC were a little sniffy about it all,” explains Jon, “but the Halle are with us, so too the Philharmonia, and Bournemouth Symphony. The London Mozart Players are always keen of course. At the moment waiting on the Royal Scottish and a few others. Aurora Orchestra were supposed to be getting in touch about playing some symphony or something from memory, but we suspect they forgot to come back to us.”

The implementation of the scheme follows an extensive series of trials bringing string quartets and wind quintets to Sunday morning five-a-side football matches. “What really surprised us during the trial was the music played actually helped the young players on the pitch – it made them less aggressive, perhaps even more collaborative,” explained Jon.

When Pitch Invasion goes live later in the year, orchestras and ensembles will make use of a variety of outdoor tents, marquees and gazebos protecting musicians and audiences from the outdoor elements during the live performances.

One football club will make use of the same outdoor concert venue Edinburgh Festival introduced at the height of the pandemic. Outline plans make it clear that audience members will – unlike many concert venues – be allowed to take drinks to the performance.

“It’s all about partnerships now in the arts world,” explained Jon Jacob during the launch event earlier this week. “With Arts Council England insisting on demonstrating relevance in NPO applications going forward, we see Pitch Invasion as an effective way of not only illustrating relevance but also introducing the art form to a much wider audience. We’re keen to prove to as wider an audience as possible that classical isn’t stuffy and not film music.”

When the scheme gets underway in the summer it’s hoped Pitch Invasion will quickly expand its scope, adding to the live performance element with pitchside stalls selling arts, crafts, and street food. In an exciting development, it’s believed the Academy of Ancient Music and Orchestra of the Age of Enlightenment both famed for their historically informed performance will join forces to demonstrate the manufacture of catgut strings with real-life cats in a yurt that tours the country.

What are the future plans for Pitch Invasion?

“We’re looking at the entertainment option beyond the length of the football match to include different themed programmes and activities. We want to challenge the assumptions made about classical music, and those held about football fans.” continues Jon.

“We’re particularly pleased that Manchester Collective have already committed to running late night programmes at Manchester City on Saturday nights with that predictable electic sets hosted by the 6Music presenter Elizabeth Alker. If we can introduce things like a Meet and Greet with Premier League players too, then the influencers will have loads to Instagram the fuck out of it all too.”

“Going forward I’m especially looking forward to seeing the cross-fertilisation of talent – classical musicians getting the opportunity to improve their fitness in close collaboration with footballers and footballers getting the chance at a second career as musicians when their playing days are over.”