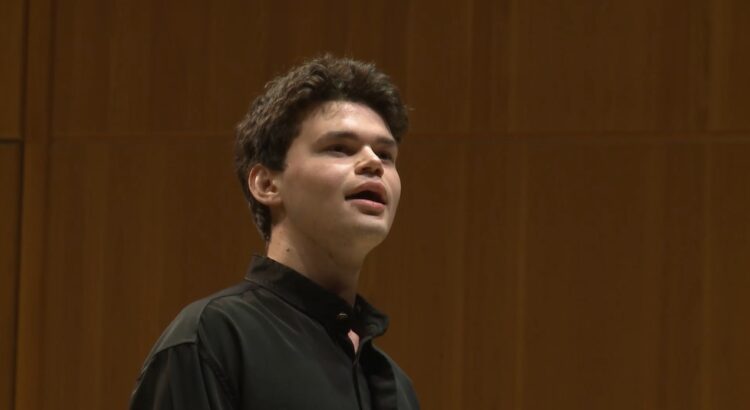 Congratulations to baritone Tom Mole who has won this year’s Guildhall School of Music and Drama Gold Medal, the School’s prize for outstanding musicians.

Awarded to singers and instrumentalists in alternate years, 2021 was the turn of the singers. The final was staged on Thursday 6 May and made available to watch back on Guildhall School’s website last night. It is now available to view for free for two weeks on the Guildhall website. Tom Mole’s Gold Medal winning performance is available with this deep link.

Baritones do as a rule leave me completely flummoxed. Such deep sonorous voices only make sense to me if they’re generated by big set men with age on their side. Mole is 22. His physical presence – he is remarkably tall stood in front of the piano – combined with a steely distant look in his eyes makes for a captivating self-assured performance. Watch him with the sound turned down and keep an eye on his face – the storytelling in his facial expressions is quite something.

The other Gold Medal finalists, tenor Thando Mjandana, soprano Laura Lolita Perešivana and soprano Olivia Boen also performed songs and arias of their choice. Accompanying the singers in the first half of the concert were pianists Josh Ridley and Toby Hession.

Mole currently studies with John Evans on the Opera Course at Guildhall School of Music & Drama where he recently gained BMus in Vocal Studies.

Such competitions are ever more important to highlight. Like the Bicentenary Prize at the Royal Academy of Music in a couple of weeks’ time, and various prizes at the Royal College and other conservatoires, prizes are the calling card for higher education establishments and the work their teaching staff do to develop the next generation of musical talent. One look at the competition alumni for the Gold Medal demonstrates that point. Jacqueline du Pre (cello), Simon Smith (violin), Susan Bickley, Bryn Terfel, Ashley Fripp, and Oliver Waas to pick out a few have all received the award. More are listed in this year’s Gold Medal programme.

Now more than ever is the time to reflect on the contribution higher education has on developing this new talent and, making the UK a location of artistic excellence. Education Secretary Gavin Williamson’s ridiculous plan to implement a 50% cut in higher education funding for arts subjects threatens that hard-fought reputation for artistic excellence.

In short, Tom Mole’s mastery isn’t a fluke or magic. His win is evidence of what we risk losing if higher education funding is cut.