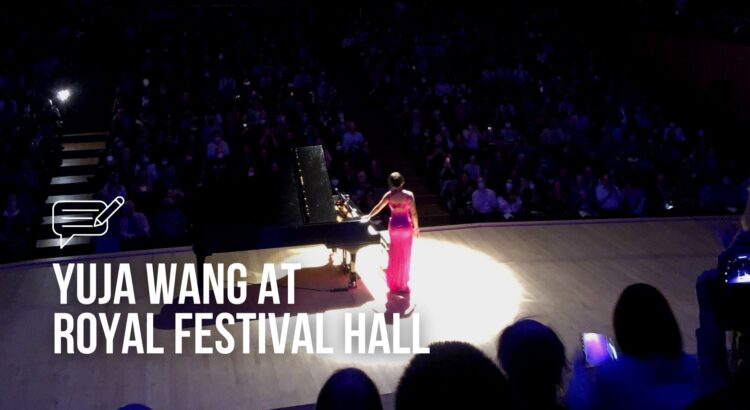 Yuja Wang at Southbank Centre. My first time seeing The Wang play live. After the unpleasantness of daring to speak up in response to Norman’s nonsense in The Critic last year and everything else that followed, this was a no-brainer. I bought my ticket the week I wrote that blog post too.

There were hardly any seats left when I booked. Hence why I ended up sitting in the Choir looking out towards the audience the piano lid blocking the sound. Not great. Hence why this is a journal entry not a review.

No matter. Experiencing the occasion was what was most important. Some thoughts arise.

Yuja Wang strides purposefully onto stage, carefully prepares her stool, and plays with terrifying power. After which she stands, bends effortlessly at her waist, her hand resting gently on the edge of the piano, after which she sits down for the next bit. The speed of this procedure makes her phenomenally difficult to photograph even on a shitty mobile phone. There are moments in the first half when I wonder whether her bow to the audience is just part of a series of automatic moves from the audience’s obvious enthusiasm, almost as though it’s automated. She also plays at a rip-roaring white-knuckle speed in those bits where the music is fast. Ligeti’s L’escalier du diable especially so. This is terrifying and gripping. So very very gripping.

She keeps the crowd wanting more

Wang’s strategy seems to be keep the crowd wanting more at all times. That means a delay before heading onto stage (the auditorium doors appeared to be shut in readiness for a surprisingly long time). When the music is over and the bow delivered, then it’s time to stride off stage again. This isn’t a problem for me at all. It only ramps up the tension, making the audience ever more keen to applaud her more those times when she is on stage. And what that translates into are encores. Lots of them. I left before the seventh (it might have been the sixth – I lost count).

Lots of bile has been spat out by crusty old men about The Wang’s love of fashion on stage. I have in the past been critical of A Male Pianist love of trainers and trousers that cut above the ankle, but he and I have ‘sorted that out now’ and I see where he’s coming from. In light of this I should probably be carefully about how I position my comments re: The Wang’s threads. Also, I know nothing about fashion. But BLOODY HELL she looked fantastic. And, the change of outfit mid-interval gave a whoosh of even more energy when she strode onto stage at the beginning of the second half. That attention to detail adds an additional level of theatre to proceedings to an already theatrical presence at the keyboard. And that kind of detail creates a highly charged atmosphere. And there is nothing better than being in the thick of an audience that is excited to be there.

The difference in character between the first and second half was remarkable. Beethoven, Ligeti and Schoenberg conjure up entirely different and hugely demanding sound worlds. The Scriabin No.3 second movement was ravishing in its lyricism and saw tenderness that stopped me in my tracks.

We spend so long picking over how to appeal to a new (younger) audience. Yet here were most if not all of the ingredients: anticipation for international soloist; soloist playing the audience like a violin and whipping them up into a state of frenzy; a dazzling range of repertoire; theatre; huge extended applause. This was a capacity audience. And there were endless (what I would describe as) young people in attendance too.