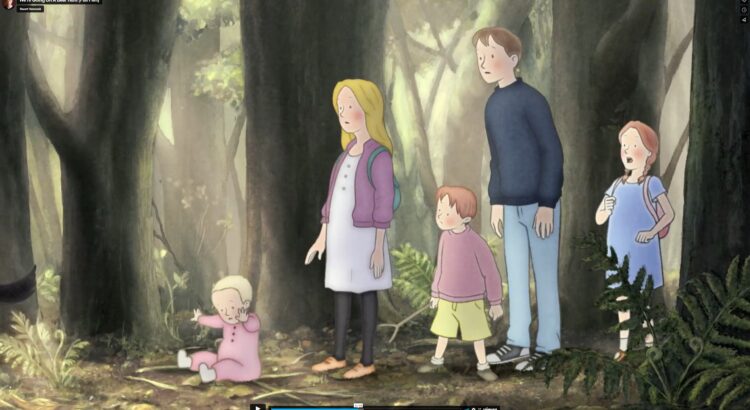 Michael Rosen and Helen Oxenbury’s much-loved picture book ‘We’re Going on a Bear Hunt!’ was brought to life in a charming 24-minute animated film premiered on Channel 4 back in 2016.

On November 5 2022, the film’s soundtrack composer Stuart Hancock mounts a special performance for all the family at The Salvation Army’s Regents Hall in Oxford Street, performing the live soundtrack to the film.

If you’ve not seen the film you’re in for a treat. The animation has a pleasing whiff of the 80s textbook French for Today’s Famille Bertillon about it, mixed with a hefty dose of Raymond Briggs’s Father Christmas. The look and feel is definitely middle-class shabby chiq. I’m in no doubt the parents of Max, Katie, Stan and Rosie prefer it when their parents shop at Waitrose.

That’s not to knock the visual treatment in any way. The seemingly simple animation of gorgeous watercolour scenes is utterly delightful all in itself. And in terms of story – expanded from the picture book – there is a pleasing simplicity to it. A life lesson about loss told through characters drawn with a fine pen and coloured in with paintbrushes on a rainy Saturday afternoon. There’s peril too. There’s a moral. There’s mud. And (spoiler) there is a bear.

And there’s the most charming dog in the world who deserves his own film. Rufus.

Hancock’s score nestles in nicely supporting the visuals and underpinning the message. In fact, at the time of writing I’d say the score mitigates the underlying message, helping the story to wear its wise advice lightly. The music is colourful, the orchestration characteristically sparkling.

That musical style is definitely Stuart Hancock calling card. It’s evident in his concert music, some of which was released by Orchid Classics a couple of years ago.

Violinist Jack Liebeck performs Hancock’s Violin Concerto with the BBC Concert Orchestra drawing successfully on the composer’s instinctively cinematic and televisual musical language, including some pleasing nods to Hancock’s compositional hero John Williams. The orchestral variations also included on the album have a whiff of John Barry about them too. Maybe even master craftsman composer Nigel Hess.

The technicolour excursion ‘Raptures’ demonstrates Hancock trademark efficient writing (if you’re looking for a similar example in Bear Hunt – listen to the 1 minute Bear Chase). What links all of these scores is a clear love of sparkling detail. It is as though he’s written for specific people in mind – people he wants to impress and excite. Musicians in the band? Kids?

During our brief conversation about the forthcoming concert performance on November 5th we talk about the album (I basically fanboy him). I ask him about how the format – a live soundtrack performance of We’re Going on a Bear Hunt – is a great way of introducing the symphony orchestra to a young wide-eyed audience.

I learn there will be introductions to the music given by Hancock specifically with that idea in mind. Perhaps the likes of ‘We’re Going on a Bear Hunt’, Zeb Soanes and Jonathan Dove’s collaboration on Gaspard the Fox, or Bernard Hughes ‘Not Now Bernard’ with Alexander Armstrong are the present-day equivalents of Saint-Saens’ Carnival of the Animals or Britten’s Young Person’s Guide.

Maybe, I put it to Hancock during our conversation, there’s something in what the Lerici Music Festival (and Grange Opera) music director Gianluca Marciano said to me a couple of months back about getting the kids excited about classical music so they’ll hound the parents to buy tickets. Hancock’s reaction makes me think its something he hadn’t thought of but absolutely makes Very Good Sense.

Potentially then an animated (lovable) character say like Rufus could hold the key to attracting a whole future generation to the joys of concert-goers. Maybe.